Tham khảo: How to Create a Severed Arm in Photoshop

In this short tutorial I will show you my technique of creating highly realistic security camera effects in Photoshop. It’s not a difficult effect to achieve, I made this in about 30 minutes. It’s a really effective and very realistic as you can see on the preview image. If you like it, please stumble it.

This is what you will achieve at the end of this tutorial. 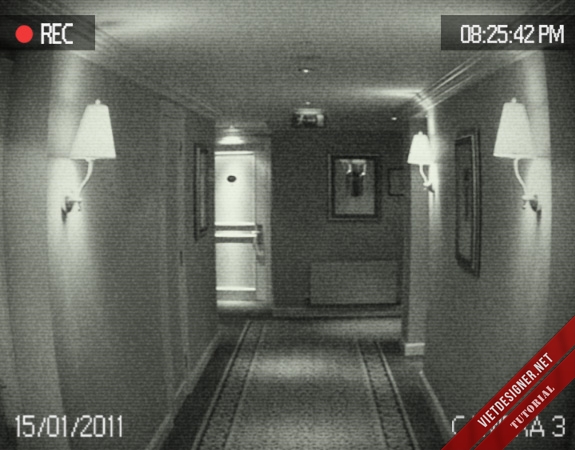 If you ever looked at the images captured by a surveillance camera, you’ve noticed that the quality is quite low so we will have to recreate that low quality in order to make the effect as realistic as possible. Text fonts are also important. On the following steps i will show you how to achieve that realistic surveillance camera effect.

Start by opening the room stock image provided or any other picture where you want to add this effect on. The picture should not be very big. An 800×600 image is perfect. In order to make this tutorial easier to follow, I called the layer that contains the stock image “ROOM“.

Then I went to the menu Filter>Distort>Lens Correction and I added a bit of bulge to create an eyefish effect. Also add some Vignette effect. See the image below.

Next, I added a gradient map to change the color of the image. Most surveillance cameras record black and white images but I added a very subtle touch of green. 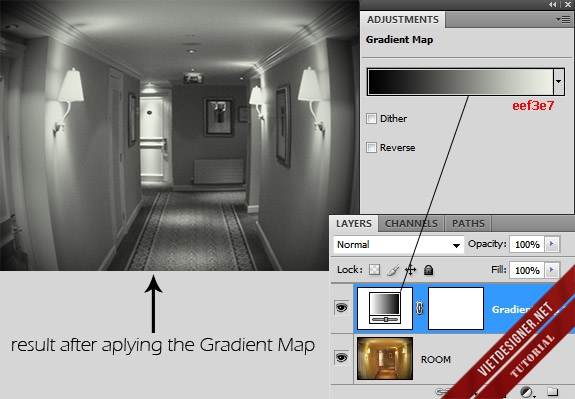 It’s time to add some noise to the image. I created a new layer above the ROOM and the Gradient Map layers created on the previous steps, I filled it with white and I rendered some Clouds fromFilter>Render>Clouds.

When you have the clouds rendered, go to Filter>Pixelate>Mezzotint and choose the Fine dots type, click OK to apply theeffect.
Rename this layer to Noise, Change the blend mode to Soft Light and decrease the Opacity to around 20%.Now you got a pretty good noise effect but still not realistic enough.

Add some blur to the noise from the menu Filter>Blur>Gaussian Blur and add a 1px blur. After applying the Gaussian blur, I also applied some Sharpening using the Unsharp Mask with Radius 1.3px.

Still working on degrading the quality of this image. Now you could add some scan-lines to this image. If you happen to have a scan-lines pattern in your Photoshop library, select the horizontal scan-lines and paint all over your image.

If you don’t have scanline patterns, let’s create them. Create a new 4×4 pixels document. Create a new empty layer and delete the default locked background layer.

Select the Pencil Tool (B) (not the brush tool) and set the diameter to 2 px. Draw a horizontal line using white color on the top of the canvas. When you’re done, go to Edit>Define pattern. Give it any name you want, save it and close the document.

If you now select the Pattern Stamp Tool you will see that a new preset has been created.

Create a new layer and name it scanlines. Select the Pattern Stamp Tool, select the pattern you just created and paint with it on a new layer. Change the Blend mode to Soft Light and Reduce the Opacity to 50%.

Let’s add a bit of green to these scan lines. Create a Hue/Saturation adjustment layer as clipping mask on the scan lines layer. Use the settings depicted in the image below. 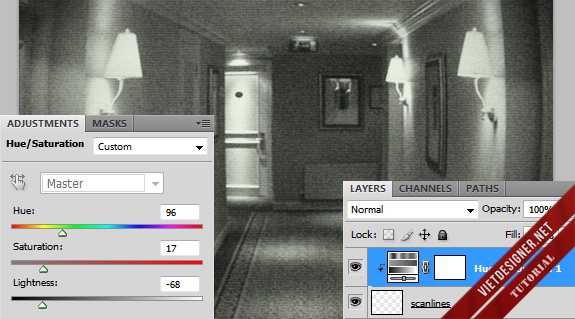 The image effect is done. All you have to do now is add some text, such as the date and time. If you want a realistic look, you should use a text font that is pixelated. I used the Photoshop Large font, all photoshop versions should have it. Even the text should be a bit degraded. I will show you a tip to make the text look realistically degraded.

Add the text that you want but use a larger size than you actually need. For example if the size 36 looks ok for you, increase the font size to 48. Then, right click the layer that contains the text and choose Rasterize Type.

This process of reduction and enlargement will decrease the quality of the text on the edges. Also don’t use a pure white color for the text. I used the color #f2f2f2.

Add more text and use the same technique to reduce the quality of the font. Add a black background to the time text and decrease the Opacity to 50%.

Photoshop
How to Create a Severed Arm in Photoshop